The TKO sound crew was born from the idea of Barry Boothe and Brian bailey in the basement of Barry”s mother”s home when Barry was only 16. That same basement would go on to produce then now legendary TKO mix tape which Ron Nelson (then of the fantastic voyage program on CKLN 88.1) featured on his radio program. Now everyone in Toronto knew the name TKO. 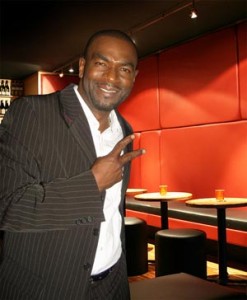 TKO was asked to play many high school dances. On many occasions the venues for many of their dances were too small to hold the amount of people thus causing them to be band from many high schools. This didn”t faze Barry. If the schools would not have him he would put on his own parties. Barry would call on his friends from the Regent Park area and do Blocko”s in the Park. They would take the power from people”s homes or hook up their system to the light poles. From there he went on to do now the famous 100 St George blockos.

In the late 80”s, The TKO sound crew would move in a different direction. Not wanting to be labelled as the “Sound Crew for Kids”.The TKO Sound Crew would move towards during college and university dances. York University, University of Toronto, Seneca, and Humber College became regular venues for TKO. Not just satisfied with just the Toronto scene, TKO frequently played dances at Carlton University in Ottawa and University of Windsor”s Sports Weekend. During the summer and every long weekend TKO would team up with the Ebony Sound crew and virtue shut down the city”s party scene. It was common to see one thousand people inside and another 5 to 6 thousand outside trying to get in.

As times changed so did TKO. In 1989 Barry took the sound crew full time into the club scene. Gotham City, Falcon”s Nest, Copa, and Spectrum just to name a few. By the end of mid 90”s Barry focus changed from TKO the sound crew to TKO the Sound. The Sound that had been the backbone of the Crew and started his own Sound Rental Company. TKO created over 30 A list DJ”s in the city. Most of the DJ”s that are house hold names now at one time played for TKO.